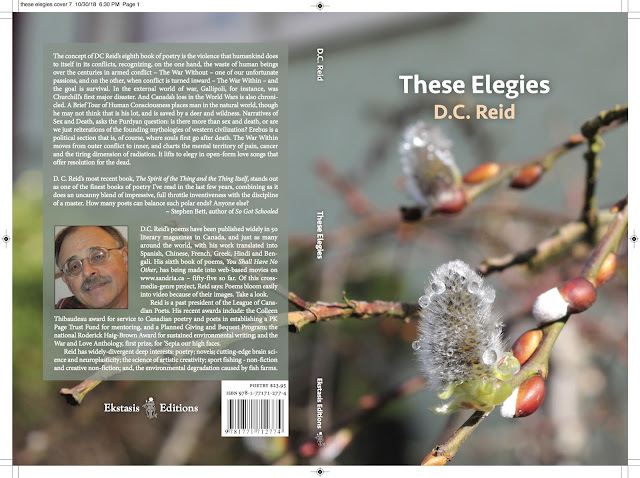 Send me a comment if you would like to receive a copy.
Posted by DC Reid at 12:40 No comments:

How Does A Warm Animal Come To Her Death?

The elk lies in its body of ribs, fallen
together as hands in prayer. I see
xylophone bones and meat's white growth

of fly. The skull has no one to look at me, but
a pink toe looks a blood eye left to find my own.
Half an ungulate jaw, the other not found

in second-growth bush, or century of sweat
down my black hair shirt. Could she,
if she she be, have mewed her own

small ending? A jaw of long white fids
unspliced her arteries: adventitia, media,
intima, to snuff the life of eyes.

I consider teeth-shortened bones,
not lungs around which they
breathed and returned. Hamstrings

on my calves, I finger hide too
worthless to be eaten. Where are mouths
that ripped warm life to feed their own?

I might stagger among alder haze pursued
by green fly. But I know no fear. No wolf,
no cougar. I am short-sighted bear

and shamble wilderness as though  I own it,
the chocolate lily on the grading that bore
a railroad a 100 years ago, taking

skeletons of cedar to men. All the men
with sweat from their mouths. Plank holes
chopped in trunks, and double-ended

blades with teeth many inches deep.
Now, the bones of elk starve perfectly
fed on by mosses taking them to calcium.

The white hair, the white bone, the white owl
become a winter. What else is there to know?
Ah, the maple tree, grown from shore,


topples a century into river. So many
questions. Such indifferent curiosity.
No one eats a carnivore.


'The blood eye left to find my own.' 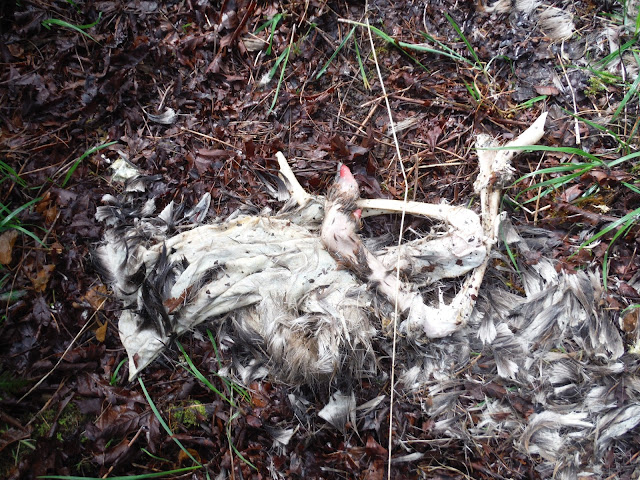 Several images of: 'The maple tree, grown from shore / topples a century into river.' 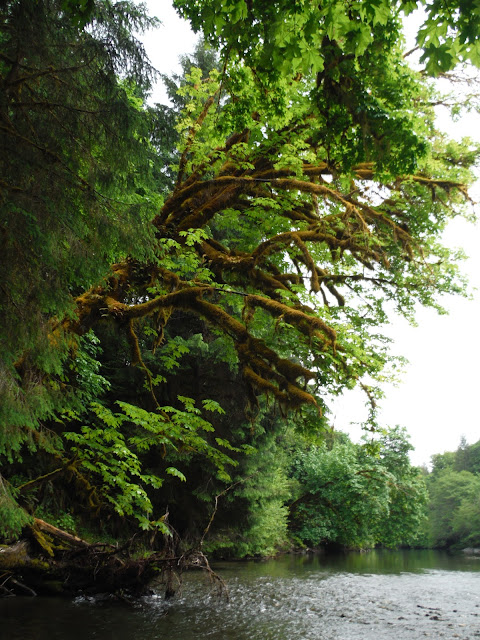 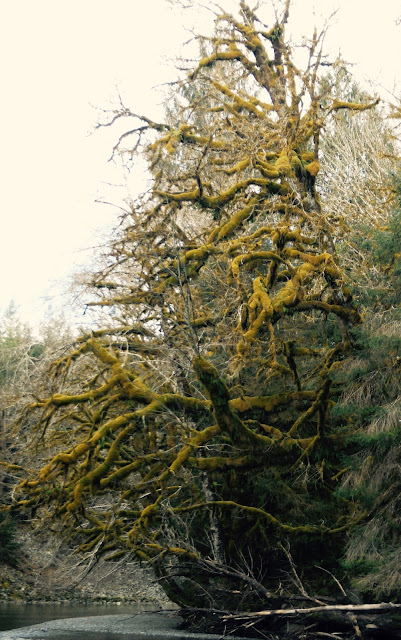 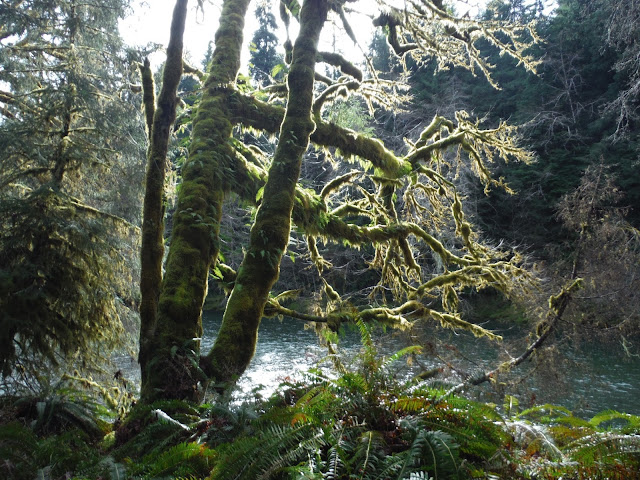 And, if you can believe it, I found a rock that looks just like a cougar head, stumbling around in a North Van Isle river on a warm summer day. Isn't the resemblance uncanny, almost eerie? It is six to eight feet across.

Email ThisBlogThis!Share to TwitterShare to FacebookShare to Pinterest
Labels: DC Reid, How does a warm animal come to her death?

A Poem About the Water, Land and Animals of BC

I could simply give in

It is morning and I am kneeling
in the river that trembles my hand.

There is flesh in this morning,
the fragile of sockeye, living on

in winter where they should not live.
There is the beat of a hidden heart,

and the river gives and takes a life.
My hands grow ghostly

at the ends of my arms.
The flesh in them will not end today.

The blue-green knowledge
of nothing is: Sitka, cedar and sedge.

As though a coastline makes a difference.
A ragged place of feet in boots and laces

come free. Only the legs keep moving,
scattering salmon that should not be.

Their purpose is as ours: to make
an acquaintance and break

in water the colour of thought.
I could simply give in to making life.

My feet, trembled into nothing,
run red rocks from the basement

of time. They know no other
purpose than striding the Taylor,

the Elk, the San Juan,
any source of knowledge

that is passed to the tree
after it is passed through me.
Posted by DC Reid at 12:36 No comments: 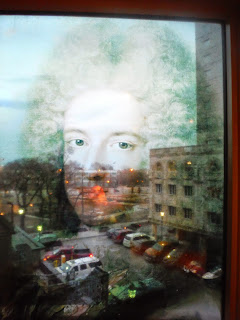 Glosas from: The Spirit of the Thing and the Thing Itself

Nothing could now disturb
the white infinity
of his radically altered syntax
the total absence of verbs.

Nothing could now disturb
the sweet of fallen snow. A proverb
perhaps. Could it be so to a tongue
or an angel dipping low, to serve
or slip a pin? For snowflakes
are perfect too, as an angel from
a perfect illusory god. How I miss
it so: belief’s rotund head
of satisfaction. Link me up, USB
my dreams, my god spot if you like or

the white infinity
with its loss of deep. Can you see
in a white mind in a white world on
a white cloud where all is irretrievably,
resolutely, inescapably, invisible
to the atheist, but populated with
non-existent ancestors of those
who do believe? I shouldn’t be a scold,
and accept anyone’s belief in anything
that does not incinerate the believer

of his radically altered syntax.
Somewhere most anything must be, an axe
precise as the neck of a guitar, the logic
of picks and fingernails that attacks
music, cracks callouses on finger tips.
Find me a melon without a dead
spot, anything in a white room
with muffler ears, say a Buble flake
out-riffs a flat jazz-man drift: meaning
Sinatra should have left his heart

the total absence of verbs.
To be is to be in motion not swerve
through crooning a lullaby, a dirge.
There is no need of un-motive words.
Who needs a tune without a tune,
or the waxy, fuguey Pachelbel?
Alas, my fingers have no memory
and come to black and white without skill.
But I can listen and my teeth are perfect.
All god things come to he who waits.

And it’s hard being dead,
and full of retrieval, before one gradually feels
a little eternity. Though the living
all make the error of drawing too sharp a distinction.

And it’s hard being dead.
A worm will spew a little dirt on the garden bed.
The robin in its endless search is a strobe light finding
the oxygen of your lost attention, your tongue at a twisted
lip. Desire is a molten thing, it moves within my thighs.
An ocean is a horse that knows only where it goes
and when it turns in winter aspen conjures
a beauty. You can’t say what kind only less
sentient, sentimental, less squandering.
Instead, I or you have a toe testing the linoleum

and full of retrieval, before one gradually feels
like the heron, head aside on its beach asleep.
In its vertical world, we are a granite monument
to waiting. The gecko’s on its white washed wall
with sucker toes, the sound of rubber boots.
Hey there in my pants, where the fate of
mankind resides and subsides from time to
time when you are away; that long
interminable rope resists being apparent to
the looking eye, the hungry iris, or

a little eternity. Though the living
the modernity of the galaxy believing
with intensity the black matter we cannot see,
the dust. Without eyes there is nothing
other than now as the frowsy heads of
hyacinths break bluely from the snatching hand.
Starry, starry night, without a sound for
striding within your brain, upsetting
the ear’s knack for keeping our feet on the
ground, the sapient, sentient Earth, the sphagnum;

all make the error of drawing too sharp a distinction.
The endless cantor of winter muscle, the stamping
horse feet on their way to spring, under Northern
lights at 3 am, the tingling ionosphere responding
to the squeak of 30 below. The hard hard snow,
the sand, the hourglass. Say you misstep, head down
and sleepy with scent of women. You land
a gibbet in the reins. The horse you never
liked much, walks you over, each hoof making
an accordion of your ribs, a broken boat, a place to go.

But that was later, after we had made the passage
from the faint light of morning star and pale moon
to unscrupulous noonday with its major chords –
battalions marching across an Escher landscape.

But that was later, after we had made the passage
to soldiers, the tinklings of war, vintage
melody of bullets from our guns. Across
a vagina-darkened sky, green message
trails from the Earthen garden. No trees left.
It was well into the fire of Marxists and
romantics, with no known colour or form.
But we with hands could discover
what our eyes in their anticipation
saccaded across the sky in jerks.

From the faint light of morning star and pale moon,
cerulean, sucre, sale, some Sze Chuan
spiciness, and fruit flies drunk
on the rim of my midday beer soon
lived my work among shafts of sun.
The dust that rose between my shufflings,
might shout: my work! my work! – to the empty
sun-filled room, its implication of wont
or lack of wont. A firework I did not see,
for I have never seen enough, then blast

to unscrupulous noonday with its major chords.
Poewtry? Oh for love, necessity, reward’s
inability to make a shilling or be one.
(You’re so tiresome for asking of award$.)
There is no corporeal voice that makes
the air pure bread, communal,
the yeast of good conversation.
And that pesky beer. I should not have
drunk so much. I trudge the flags
of a spectator’s belief in

battalions marching across an Escher landscape.
The earthquake of understanding, the escape
to solace or stupidity, for there is no keen
algorithm to match the sszt of citrus drape
the morning. No love of course, for that
is husbandry of foolishness, of June apple
so tart we spit pulp from our lungs. Worm?
Oh, we could and would have eaten that. We felt
harpsichords coming on, the relentless perfection
of our song. Smell the cork and the after cork.

DC Reid
I won the national RODERICK HAIG- BROWN AWARD, 2016, for environmental writing, largely for this blog (www.fishfarmnews.blogspot.com) that has become a global portal for the environmental damage made by Norwegian-style fish farms. I won the Art Downs Award for 2012 for sustained and outstanding writing on environmental issues, in my case, fish farms. The award was based on 10 columns on fish farm issues in the Times Colonist newspaper, three public submissions to the Cohen Commission on Fraser sockeye and this blog - more than 600 posts. If you want to book me to speak, for a lecture, talk, or panel on fish farm environmental damage, contact me on this blog by leaving a message on a post.